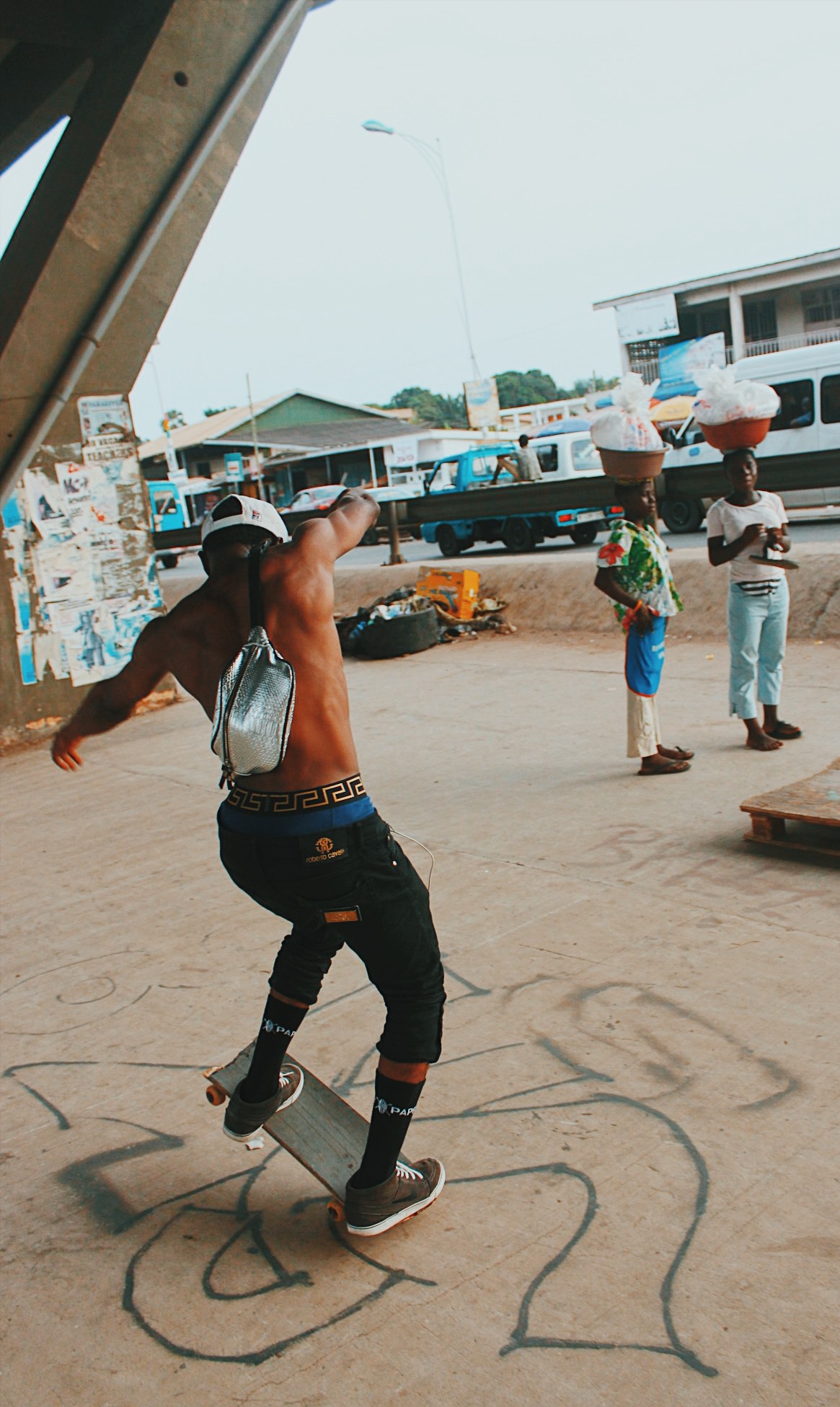 Ghana is interested in skateboarding and its gradual acceptance in society is evident, even if skateboarders have been in existence for nearly up to fifteen years. Cool brands are all flying down to make photoshoots with skateboarders, big foreign TV stations, Vogue, CNN, BBC, name it. But there was a time when it was thoughtless to ride a wooden board without folks assuming the circus came to town, but no more, daily, people embrace the culture of skateboarding and see it as a way of life. Before one can do a kickflip all year round and nobody gives any care in the world, as a matter of fact Ghanaians don’t want you to skate on their premises, car parks, not on the road and definitely not at their precious malls. They don’t want to see kids grinding and nose bleeding, cruising down the streets living in a different way. That representation was lacking, to not be loved and supported by your own country killed the vibes of whoever had an interest in skateboarding in Ghana. A lot of youth quitted save for a few who are religious and try to keep the culture alive.

There is a festival in Ghana called Chale Wote where all the cool kids in Accra, wide and the diaspora love to attend in the summer, it has a lot of alternative events that attract over 30000 people. Three years ago, under the scorching sun, in the open road, cars passing occasionally— mostly the police, children and women in throngs, a group of skateboarders gathered to skate in public with music blasting in the air as they spun their boards to the clicks of cameras and cheers of onlookers. That happened to be Surf Ghana’s first public exhibition. That same day in another wing of the area the collective also arranged for a group of international artists to paint 25 skate decks on display in the Brazil House, one of the festival’s premier indoor venues, in addition to contests and skate lessons.

Three years ago, a talented millennial worked hard behind closed doors to put together a collective united by their passion for skateboarding and surfing. Her name is Sandy Alibo and she’s from Martinique, a French island near Jamaica. She was the sports strategist and communication rep for Orange in extreme sports. Three years ago, she discovered Busua through searching for a place to surf and that was how she found skateboarding. “I fell in love and decided to go back to give and invest more. After developing some friendships, I followed my heart and this is how everything started. I decided to leave France to found the collective,” she explained. Surf Ghana is a collective of skateboarders who have talents diverse to skateboarding that includes Coaching, photography, carpentry, shaping, styling, painting and other forms of artistic expressions. A passion for photography attached her interests to extreme sports, the stunts and tricks caught on camera. After skating or surfing for a number of years one realizes that the key components of extreme sports, despite what people think is a love for celebration, love for landscapes and architecture and the curves on the street. “If you love the street then you love skateboarding because it is the prince of the street. I love the unconventionality and disorganization of the sport.” Surfing also celebrates nature and the love of collectivism, which Sandy discovered seven years ago. “I am a beginner of both sports but what I like about it is that nobody cares about your level, more your passion. How you feel in the water, how you feel on the board, and what you can share with that. Another thing about this sport is it celebrates travelling in a means to discover new spots.”

Ghana is an amazing country and it is also one of the top countries to invest in today, there is an amazing dynamism about the economy and Ghana celebrates independence and freedom more than other countries, you can speak and feel safe and you might never see another creative scene like it in music, in art, in sports. With a cultivated dream to go abroad to work on a project, a social project, Ghana felt like the right place to set up shop. “for me it is better because I feel like in society right now we can never do a business and be all about money, or live happily without thinking about others and how they can be happy, even if the project is not to save the world but if you can put a smile, create and give employment and increase life expectancy, Ghana felt like the perfect to do it.”

It is evident that Sandy uses her professional background and business acumen to generate ideas that sustains the collective. It is rare to see Africans come together for a project that is great and of good benefit; Surf Ghana is a proof of that. There are also other organizations that support skateboarding like WafflenCream, Decathlon, Skate Ethiopia, League SB, Africa Riding, Skateistan,  and the African skateboarding diary.

Surf Ghana has flourished due to partnerships and the first was with Ahanta Waves which is a surf school in Busua. Partnerships have helped the collective secure some of their goals which includes easy access to extreme sports for the youths of Ghana. Much emphasis on Ghanaians because the sport is only accessible to the elite and the elite in Ghana are mainly whites.  Sandy, when asked about how she runs the collective said: “If this guy can do it why can’t I? I created the account with that idea, that every photo or project will represent a Ghanaian.” Surf Ghana, with the help of other organisations, has imported surf boards, shoes, skateboards and other equipment needed but they aim to be local and eco-friendly.“The idea is to save the planet, to save money, to create jobs and to avoid the corruption of importation.”

Surf Ghana as a collective has had a lot of good growth due to their partnerships with famous festivals and events in Ghana. Ghanaians love music, a lot, African in general. The idea was not to fight for inclusion with other sports but to become involved with the festivals Ghanaians already love. Surf Ghana supports Asaabako, Chale Wote and Accra food festival. They also created their own events.

NOISE was to celebrate the relationship between filmmakers and skateboarders, to show people how contents are made and how it involves partnership and trust between the skateboarder and the person who captures their stunts.

M.A.S.S.S: Music, Art, Skateboarding and Secret Spot. The idea was to celebrate skateboarding in a secret location with people who have no knowledge about it, in an eco-friendly environment.

Poring through all the exploits one can easily see a dedication to social activism and fight against the pollution of the environment. An example is the project of beach cleanings in partnership with the University of Takoradi to teach the students how to surf and to clean up where they surf. Since then, there has been a rise in the culture of beach cleanings that are even more organized and better carried out than Surf Ghana’s initial project. Students from the University of Takoradi also returned to develop a basketball court on their own. It shows involvement. It shows that the community understands a need to develop itself. These are activities that are not documented and shown abroad. And as a small collective it is nice to see people imitate your lofty actions.

More than anything, Surf Ghana’s Skate Tour Gh changed the way the country perceived skateboarders, the 12 days tour around parts of Ghana to teach children the new culture of skateboarding was like a revival campaign that took the country by storm. With a crew of 12 skateboarders in addition to two filmmakers, a journalist/photographer and two graphic artists, a diverse range of skating equipment and food supplies piled into the van, the tour proved to be a success. The event was supported by Vans, The weird cult, Decathlon and Native Magazine.