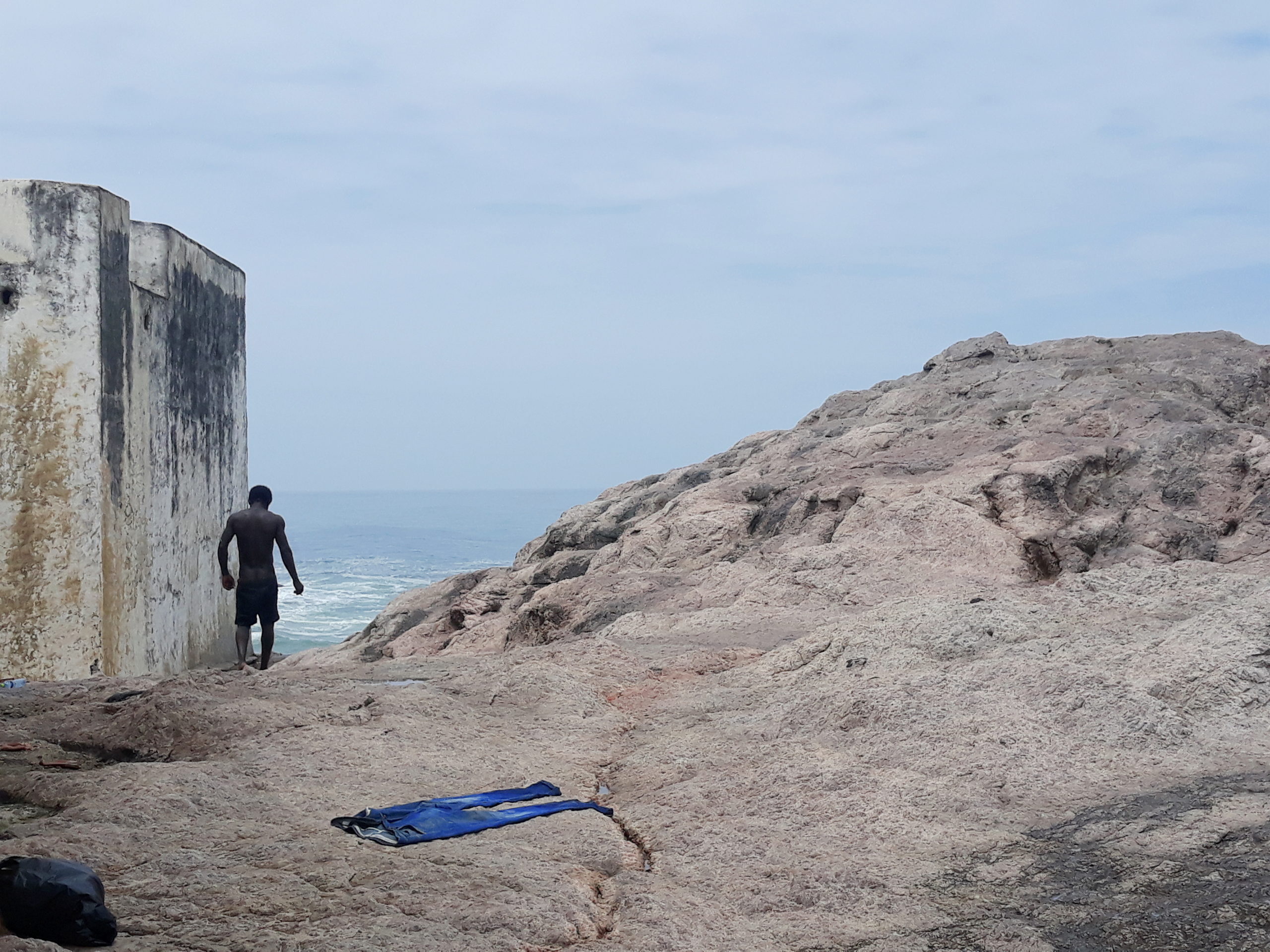 I am beside him on the hospital bed watching him cry a deeply retching cry that contorts his face into a mask of pain and vibrates his body. Teary-eyed, mouth open to the world. On his right hand is a large slice of pawpaw, his first meal in days. He says he has been forced into eating it because, just like his zest for life, his appetite disappeared with his good health. The pragmatic succour a slice of pawpaw offers is lost in the sorrow of this man’s dying body. He says he has lost all his blood since he fell sick and shows me his green veins and pale palms as proof. In between heaving sobs, he raises his face to look at me and tells me he does not want to die.

He believes his wife wants to kill him. This belief, the terrible fear it inspires, almost oozes from the pores of his skin and each time he speaks of her, there is a quiver that begins at the sides of his lips and spreads to his fingers. He turns slightly to the right, touches his waist and explains that the pain is strongest at the base of his back, although everywhere in his body hurts.

Nothing else makes sense to him except the promise of good health. The drugs, the tests, his presence on this stained, creaking bed in a hospital two miles from the nearest traffic light is his last desperate gasp at life. Outside, a gun blast goes off in the distance but nobody in the room moves.

I imagine a sky perfect for falling in love. The clouds block out the sun and the winds caress guava trees into a slow dance of atilogwu. I imagine a young woman giggling at the words of a man who isn’t even funny. The blind stubbornness with which they agree to spend the rest of their lives together and the remarkably gentle way he slides the ring into her middle finger eight months after. “I do” she says, turning to smile at the young, lanky priest. His benign eyes are on them – he doubts he has seen a union this ecstatic. “I fucking do.” Staring at the glittering metal on her finger, the way it catches the light from the church’s chandelier, she is so sure that this feeling of bliss will last the rest of her life. It is not a product of blind faith but an almost mathematical conviction. She has done the lover’s due diligence and everything checks out. Behind them, the congregation cheers.

It is in this same church – somewhere beneath the large dome – that they meet for the first time. Choir girl belting an unremarkable soprano from a corner of the church, he a warden parading the aisles, faded green sash draped across his shoulders and an arm long enough to tap sleeping worshipers. Each time he made his rounds during mass, he would stop by the choir stand to share a few conspiratorial whispers with his favorite chorister. Some days he would catch her sleeping during the homily and a sharp pinch would find her arm. Everyone in church liked him because he was gentle and never got angry. Smiled at everyone with an intensity that made you believe he was being paid for it. She liked him because he was tall and kissed like a child.

He deemed it the ultimate affront on his manly pride. What his day should look like is simple. He slaves 14 hours at his electronics shop, weaves through an unforgiving traffic and walks into his home to meet covered dishes on the dining table. At the same time everyday. If on a certain day he walks in and finds nothing on his table, there is something gone wrong with the stately arrangement of the universe.

A round of yelling and cussing is followed by a narration of how useless each party is – how insensitive to the worldly plight of the other. If a discussion was held between rational men for whom life has become oddly simplistic, food should not hold that much power over a marriage. Over a union of love. But it did. And when she felt he had yelled for too long and his voice was more than nestling on her nerves, she slapped him. And it was a slap that transcended the itchiness that spread through his cheeks. It filled him with doubts and with a weakness he couldn’t explain. He is now silent, arm raised in paused gesticulation and watching as she turns and returns to the bedroom, the door shutting behind her.

The next morning she apologizes, with a tray of food and with more remorse than the situation demanded. But fifteen years later, his two sons are punching him in the gut. His wife is behind them directing the action. At intervals, she is reaching in with a knock on a head gone bald from age and stress, the sharp cracking sound lost in his loud whimpers. More kicks, more slaps and more crying until someone has the grand idea to use a metal tray against the head of a man they should be in love with. His head splits open and blood stains his shirt. The assaulters are gripped briefly by fear and a sense of foreboding because, despite their intent on harm, their anger is not bold enough to contemplate homicide. So they let him be and he survives and from the home of the woman who now holds him against her breast, he calls off a marriage that ended a long time ago.

You do not tell a man what to believe. Especially not this man. If he tells you there are spiders crawling around in his brain prevaricating his senses from normalcy, your job is to believe him. If he cries to you in the middle of the night and tells you his wife has set spirits upon him – tearing away his progress and his peace – and you look above his head and nothing hovers over him except a lone mosquito, it is not enough proof that he is lying. No attempt at sturdy sensibility. No smirking at the ridiculousness of the idea. Because for him the proof is there, everywhere around and in him and even you can see it for yourself if you chose to.

The lanky priest is here in the hospital. He is older now but his sultan is still very white. He has in his hands a half-empty bottle of olive oil. Its contents have brought a shine to the sick man’s skin and some hope to what lays beyond. Everything feels like a cycle, a return to the glitter of the altar 25 years ago and the cheer of the gathered faithful. The report of fireworks and the happiness of promise. I will be here for as long as he remains and I promise to not ask about what went wrong. I will hold my peace and learn the lessons that seem obvious. I will share his pawpaw if he offers and the day he leaves, I will hold his underarm and steady his steps.

Anthony Madukwe won the AFREADA Valentine’s Day Contest 2018 as well as the Random Thoughts Creative Fiction Prize in 2017. He is Associate Editor, Praxis Magazine Online and a feature writer for First Culture. His works have appeared in Dwarts Magazine, Kalahari Review, AFREADA, Brittle Paper and others