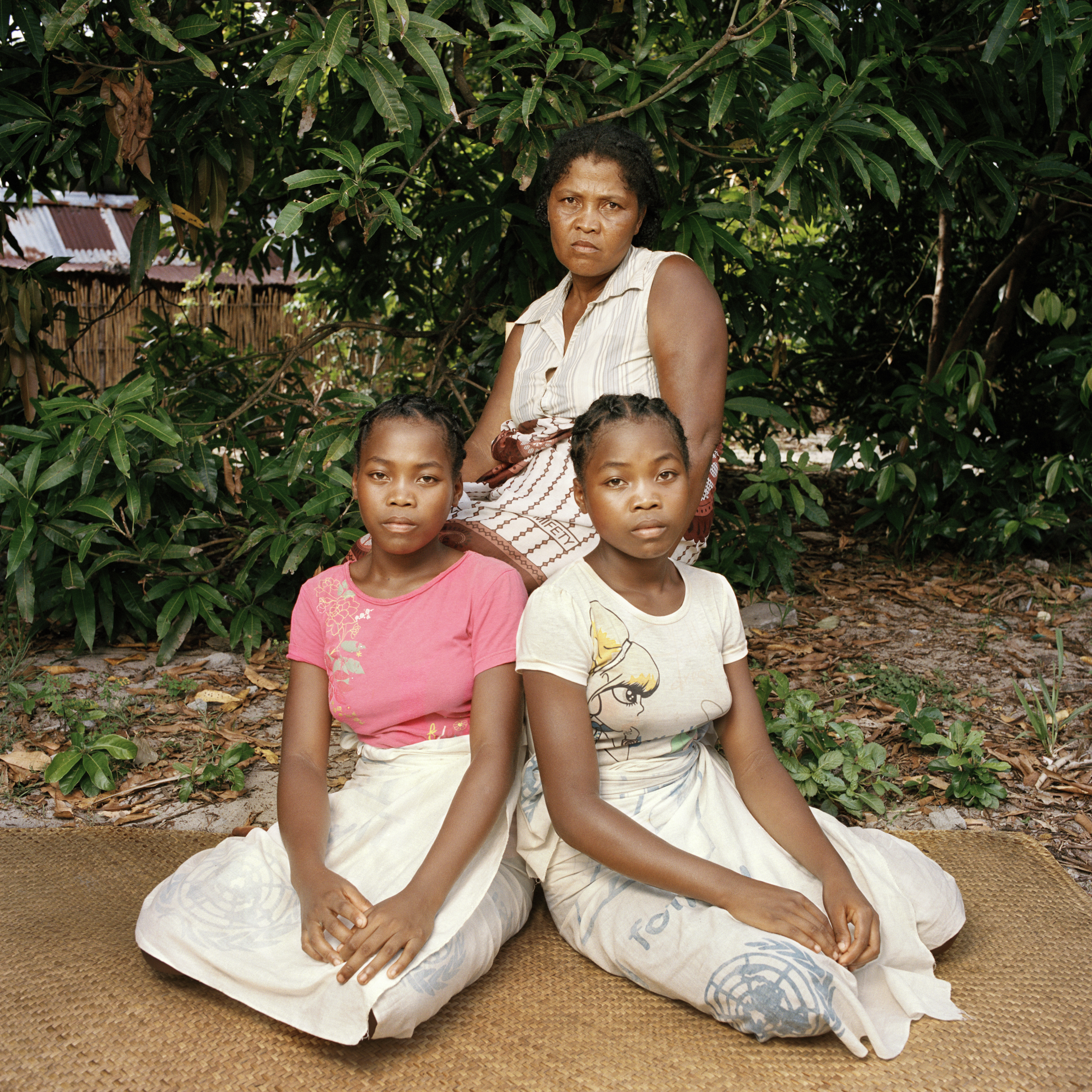 Random Photo Journal started a Journal Project focused on African Unification through collective memories… For the series, we spoke to Christian Sanna a Malagasy-Italian contemporary photographer focusing on personal and social histories in Madagascar.

“Fady Kambana” is a series of family portraits taken in the South-East of Madagascar. This photographic exhibition casts a unique look at the sensitive issue of the curse of twins among one of the coastal tribes of Madagascar. In this community, twins are considered sacrilege. They are banished at birth, abandoned in cocoa or coffee fields or given for adoption to specific care centres for abandoned twins. The tribe leaders, called the “Ampanjaka”, remain profoundly attached to this immemorial practice. They continue to perpetuate the tradition, defying the conventions and treaties on children’s rights ratified by Madagascar. Abandoned to their fate, and with no support from the Malagasy administration, the vast majority of biological mothers and fathers who decide to break the oath of the ancestors by keeping their twins, are left alone to raise their children. In most cases, their spouses leave their homes to avoid having to face other members of the community. In addition to spiritual and social exclusion, the twins’ single mother and father live in very precarious living conditions, pushing them to adopt extreme coping mechanisms to survive, and further fueling the taboo. Through these portraits, I would like to portray their story and bear witness to their acts of love faced with the fears of their beliefs.

“I was born in 1989 and I grew up in Nosy Be, a small island on the North-West Coast of Madagascar. My mother is Malagasy and British and my father is Italian, and they decided to move to Nosy Be right after I was born. As a child, I grew up in a privileged environment that separated me from the local community and the social realities of Madagascar. This situation led to a growing feeling of disconnection and uprooting which brought issues regarding my own identity and questions about where I belong. Those feelings and emotions led me to my first encounter with photography. It was during a journey across Madagascar where I used a camera. Discovering the power of the photographic medium, I realised I could reconnect with the Malagasy people and my culture, it helped me to cross that wall I built around myself.”

Why did you start making these photos?

“I was studying photography in Toulouse and tried everything I could to spend my time working on a project in Madagascar. I had this urge to document everything in Madagascar to know what was happening in my own country. In Nosy Be, we think no one, except their parents, is allowed to touch a child’s head before they are 7 years old because children are protected by the community. In 2013, I heard for the first time about the “twins curse”, or “Fady Kambana” in Malagasy where the Antambahoaka ethnic group believe twins to be cursed. The mothers had to kill them in the past, but now they abandon them, or else they will be ejected from the community. For me, it was a shock, something impossible and after finding a program helping the mothers who didn’t accept this belief, I decided to do my part and went there.”

Who are your photography inspirations?

Why is your art and style of documentation necessary?

“As I said before, sometimes just photographing is enough. I don’t think I have yet a style in photography but I have a vision that took me a lot of thinking. For me, photography is a personal necessity, it is the tool that helps me reconnect with my country to create a space for myself. I cherish Madagascar, I want to discover it and also share my vision of it with people in Madagascar, and if I can, outside of Madagascar. When you go on Google, Pinterest, etc and you search for Madagascar or Malagasy you will only see imagery for tourists and wannabe white-saviours, what you can consume. I don’t want to be part of this, I want to show what life really is and use photography for more than just advertisement.”

What is the story behind your favourite photo?

“I don’t have a favourite photo in this work, because each one of these mothers’ stories is important, none of them has it harder or easier than the other. But I would like to talk about “Celine and her daughters; Celin and Celine.” This family portrait was taken not far from the King of the Antambahoaka’s house where twins are not allowed to come and so are not recognized as part of the community, and Celine the mother is actually the King’s daughter and she was one of the founding members of “Tsy Manara Zaza“, a group of mothers that decided to support each other. This work is always about the mothers, not even about the Fady, it is about love.”

Are there restrictions you faced while documenting this story?

“I never encountered problems with the mothers, because I was always discussing with them, a bit from the King but nothing that could restrict me. But before I went there I had to ask myself a lot of questions; I am Malagasy but my skin and my face is white, I am also not part of this community because I come from the North-West Coast and they live in the South-East Coast so we do not speak the same language. To them, I represent on many levels, a foreigner and I had to think about that because in Madagascar, like in many African countries, we have a history of foreigners documenting our lives and I had to reflect on that. I could show their struggles but then I realized that this could result in further fueling the taboo, so I had to question my reasons for being there and what I wanted my work to do.”

Fri Jun 26 , 2020
Random Photo Journal created a Journal Project focused on African Unification through collective memories and we reached out to frequent travellers around the African continent and asked them to share a series of photos that represent a memory about a place they visited, currently or in the past, attached with a story that led […]