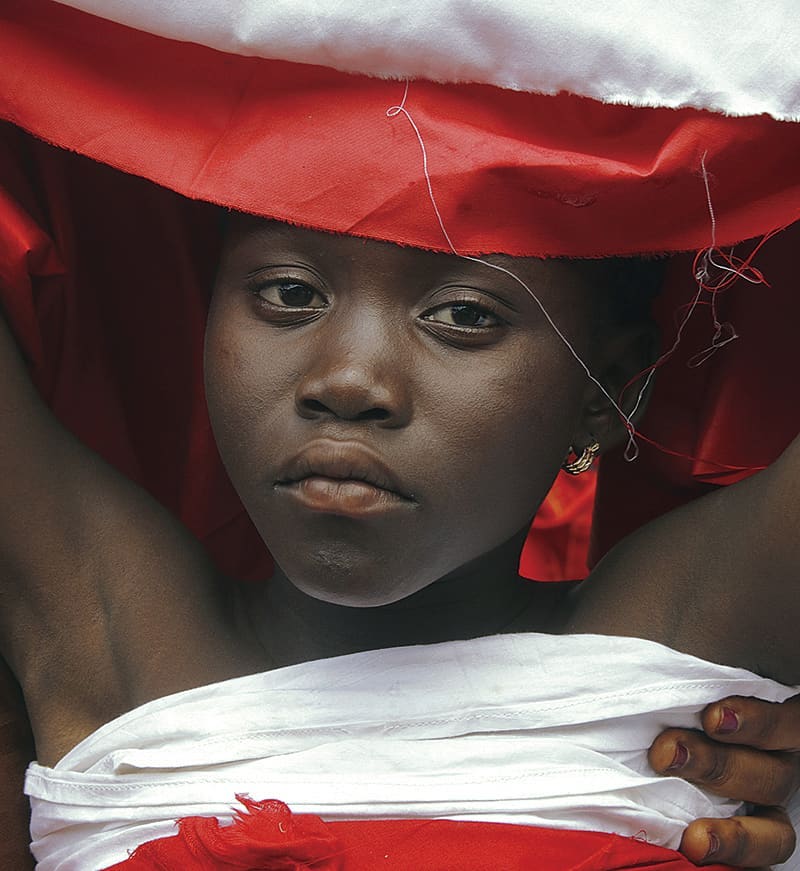 Some anthropologists believe the Yoruba religion has been practised as far back as eight thousand years making it truly primal and aboriginal – to put this into perspective Christianity has said to be around for only two thousand years. The Yoruba indigenous beliefs see the world as a product of two connected worlds. The visible material world and the invisible spiritual world. The connection between these two worlds produces power that is called Asé. Similar to Chi in Chinese traditions or the energy that flows through Chakras in Indian beliefs. Asé is the divine force, energy, and power from the creator that incarnate in the world. It is the life-force that runs through all things, living and inanimate in the universe. It is recognized as the power to create and produce change which enables people to find balance in life.

Random Photo Journal started a Journal Project focused on African Unification through collective memories… For the series, we spoke to Anthony Shintai Olabayo Amao a Nigerian Photo and Videographer born and raised in the indigenous city of Ibadan and based in Birmingham on his latest photo project Yorubaland

What made you want to document the traditional history of your ancestors and when did you first start thinking about this project.

I’ve always been curious about the religious choice of my family, but I began to explore this  curiosity when I moved to the UK and learnt about the history of Christianity and how it was introduced into West Africa. This was around 2016/2017.

I’ve always been fascinated by the deity Sango, I used to watch some Yoruba movies on this god but growing up in Nigeria, I was conditioned to believe any form of worship associated with the traditional belief system was a form of witchcraft hence why I avoided the traditional religion. But as I was settled in the UK, and had the resources for acquiring deeper knowledge and understanding, I reignited my interest in the deity Sango and spent a lot of my time researching about this deity but I also wanted to find out why people who follow the traditional religion are often judged and looked down on within the Yoruba Society.

I came to the UK in 2003 and I’ve only been back home to Nigeria on 3 occasions. The first was in 2008 with my dad, this trip was merely to catch up with friends and family, and the second in 2018 with my family to attend my cousins’ wedding. It was actually in 2018 that I initially wanted to document the traditional religion but I missed the Sángo Festival that year. So I reached out to the Oyo Cultural Foundation and they counted the days and moons based on the traditional Yoruba calendar to provide the date in advance for the 2019 Sángo Festival which gave me more than enough time to get ready.

The trip to Oyo town last summer was the first time I traveled to Nigeria by myself. It felt like it was a now or never situation really. My intuition was telling me this was the time to dive and explore the traditional religion from its source. This was at a point where I’ve already read a LOT of articles and books about the traditional religion, so it only felt right that the next step in my journey was to experience it and I was very determined to get that experience. After learning about the true wonders of the Yoruba Religion, I was driven with a purpose to capture and showcase it’s beauty to the Yoruba Society and to the World.

How did you feel photographing these images

This project has opened my eyes and made me question my own beliefs. I was born and raised in a Christian household and always thought Christianity was the religion we were meant to follow. I was conditioned to believe and practice this from birth but after learning about the true wonders of the Yoruba religion I now feel like not everything on the surface is as it appears to be.

It felt amazing and uplifting being able to capture these images. I was greatly inspired walking around the streets of Oyo Town because this is the town my ancestors are from, it felt wholesome knowing I was taking part in the celebrations as my ancestors once did. It was a wonderful and enlightening experience.

Was your hometown all that you expected it to be?

I’ve visited my hometown a couple of times in the past so I was already familiar with the surroundings. It’s a lively energetic atmosphere fuelled by the abundance of soulful beings – that would be the best way to describe my hometown

What is the story behind your favourite photo in Yorubaland?

For Yorubaland, I felt this was more of a documentary photography project meaning I didn’t want to alter/direct the shots. I wanted the shots to provide an accurate representation of the environment, event and people. It was very important for me to reflect this in the project. I think my favourite photo is the front cover shot, of the young Yemoja Devotees holding the water on top of their head. The energy and power the young girl demonstrated were captivating, and I was glad to capture it without directing or having any influence on the photo.

Are there restrictions you faced with the devotees while documenting this story?

I think the devotees naturally felt at ease, most of them saw me talking with the council elders before the celebrations started taking place so they sort of knew I was a trusted photographer. In an environment where you think they’d be wary of the camera, a lot of them were actually asking for their photos to be taken. I was granted access to all the sacred sites and was free to document as much as I wanted.

visit here to buy the book