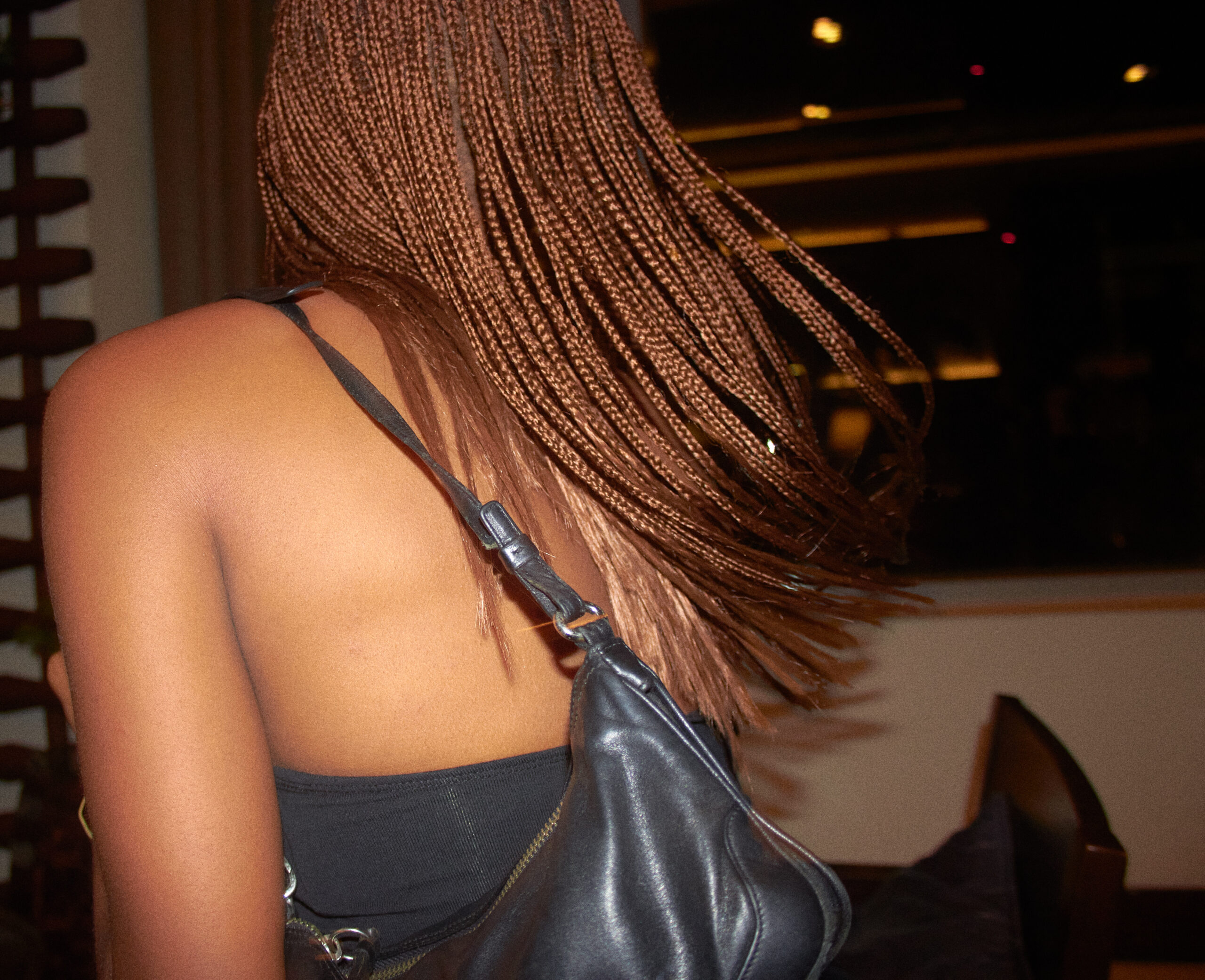 Madam Cargo was a woman in her sixties. Her reputation in Gundua Avenue preceded her. It could be because she was eccentric, always engaging in conversations with anyone who cared to listen. Although no one really knew the head or tail of what she was talking about. Notwithstanding her eccentricity, her wealth made everyone her friend and earned her respect. In her youth, Madam Cargo rose to the ranks as an Executive Director of Elros bank. Once she felt she had enough savings, she resigned and began investing. Everyone on the street knew her and that she had always lived at Gundua Avenue before anyone else. She seemed boisterous and gregarious, always attending one party or the other. Most times as the chairperson of the occasion but her arthritis was kicking in so she had slowed down on the owambe parties.
Madam Cargo body was as round as morsel of fufu properly molded and ready to be consumed. Age had done work on her dark skin, wrinkles everywhere like they were lines drawn by a kindergartner.
I arrived that morning at Madam Cargo’s house to discuss a vacant apartment in her building. She always liked to see and have discussions with her proposed tenants. When she first saw me, she gave me this look I had come to recognize. It was a why aren’t you married face. She wondered why would a young unmarried woman want to live in such a big house, maybe because she believed that my worth and respect as a person was tied to being someone else’s wife. That without marriage, I was somehow incomplete and that I could not be respected and taken seriously if I didn’t have a man or if a man didn’t have me. Since he was the one to give my life meaning, I was his property.
On that particular day, I was not triggered by all of that because I also desired to be someone’s wife. I wanted to be loved and cherished and vice versa, to deny that part of my existence was to stuff that longing with hate and anger or whatever is a substitute for a loving relationship.
So instead of being upset, I caressed my engagement ring while beaming with pride. I had arrived at this point in my life believing that experiences could possibly be the worst teacher. Because I had danced at the gate of hell and still went back knocking. I didn’t allow what happened in my past relationships dim my optimism; I knew what I was looking for was also out there looking for me.
Before I met Ebuka, my fiancé, my last relationship ended in silence. Cold and heart-wrenching silence. Of course, it didn’t begin with silence. It began like all romance does with honeyed words, skipping heartbeats and the inability to imagine a reality outside the person in front of you. They seem perfect, flawless and the romance takes you up like a whirlwind. It began with not being able to take our hands off each other. It began like all fairy-tales and romantic comedies but it didn’t have the consistency to last beyond the first few pages or scenes. When something real was demanded, he shriveled and disappeared. What was even demanded? That I should be loved. I wanted affection, intimacy and romance. I wanted to be made to feel special enough to have all his time and attention. There are people that deny others love and say things like, “that is just the way I am.” To withhold what is in your hand to give is nothing short of cruel. He became a ghost or like those memes of people fading away. He was right there in front of me but then he faded to the background until he was no longer there. I would call and he would never pick up, he stopped replying my messages. He couldn’t dignify me with a response. He was just tired of us and he wanted me to know in a nonverbal way.
The relationship before that ended more ghastly, he had told me to my face that I was unattractive, irritating, dumb and the sight of me sickened him. He said he didn’t know what he had seen in me, save for my pretty face and great sex, and to top it off, he didn’t believe that anyone would love me. If I told you that his words made me unfazed and somehow I continued to believe in myself, that would be a lie. I continued to believe his words for years.

It was 8 a.m in the morning. On her table, was already a bottle of dry gin, poured into a stained glass cup. Old Ebenezer Obey tunes were playing in the background. I told Madam Cargo that I was in love and that the house would be our first apartment after we got married. I also told her that although he lives in another state we have been able to manage a long-distance relationship and, that he had gotten a job in Lagos already.
She laughed at me – a high pitched laughter and then slapped her hands on her thighs while crackling loudly.
“Love? What do you know about love?” She said “Women, don’t have the luxury of falling in love”
She appeared to be painting something in the sky.
“Love is a fantasy. It is the stuff of dreamers.”
“My dear. I’ll lease you the apartment on the top floor for you and…”
She laughed.
“Your fiancé.”
Her voice suddenly became serious. “That man isn’t coming back.”
Her pupils dilated as if some memories were flashing across her eyes and she had been forced to look at it.
“If a man loves he can pursue. If a woman does; she dies with it. “
She took a gulp of her gin and smiled broadly, revealing her brown teeth.
“How much will the apartment cost?” I asked impatiently.
“You are not listening to me?” She said. “Is it because I’m engaging in light festivities this morning?”
“Listen to me girl! A woman does not love. Only a man does. What a woman does is to accept love; whatever kind she is given.”
She had sparked my interest. “Oh, even from a man who beats and mistreats you?”
“Come off it girl! You are acting like you don’t know what I’m talking about. You can be with a man that is so cold and distant. You’ll wish he’ll beat you. Just to feel touch. A human touch.”
“So you didn’t love your husband?” I asked.
“Have you not been listening to me?” She said. “Women don’t love. I could tolerate my husband and that was fine. At the end of the day, men don’t need you to love them. They need you to care for them, nurture them like a baby.” I laughed.
“So it is a crime for me to love my fiancé? You don’t even know him? What if he loves me more than I love him?”
“You are asking the wrong questions child. Will, he hurt you? Can you live with him? No one cares about love after you’ve seen all there is about a person.”
She fished into her purse and brought out a cigarette and lighter.
I looked at my watch. I had an hour to get to work. Did I really want to do this? “What happened to you, ma?”
She smiled. That was all she wanted. Someone to listen to her story. Her voice changed as she began her narrative.
“It was in the 1970s. I was young, vibrant. Like you. Had breasts facing the sun and a pep in my step. I met Ola at the junction to my house where I always took the bus. Our offices were close to each other. He worked in a bank too. We became friends, sitting next to each other every day on the bus and exchanging banking hall experiences. Talking every day with someone can create a false sense of intimacy, you think you love them but maybe they just needed you to pass the time.”
She took a long drag at her cigarette, blew the smoke out, kept the stub in the ashtray and continued her story.

“We soon became an item, unofficially of course. Soon promises were made, I’ll marry you. I’ll see your parents. I will always love you. The usual lies. He said he wanted to be with me forever and I believed him. We made love recklessly many, many times, maybe we were just enjoying our youth but to me, it was more.”
“He sent chills down my spine in a way that I had never known. Of course, I had been with other men but none were quite like Ola. None made me happy by just his existence and there was no one else I wanted to give my all. I loved him. Twice, I had to drink agbo to abort unwanted pregnancies. He promised to marry me you know. But the timing….”
“The time was never right… or so he said. Until one day I came back from the office and there was another woman on his bed. They were just talking oh! But something felt off. I knew there was more to it. I knew I had lost him. A woman knows. A woman always knows when a man’s love is gone. She can delude herself. She can deny it but not for long and I wasn’t going to deny that my Ola had gone out of my hands.”
“I was mad with rage. I went for his face but he held my hands. There I stood screeching like a mad dog while the woman he was with watched me with pity. “
“That was the woman he married.”
“But let’s say I go with your theory, don’t you think the woman he married loved him?” I asked.
She frowned. “Don’t be a fool, child!”
“She didn’t love him. He only fit into what she wanted. He had a good job, he was handsome and most importantly he loved and chose her. Women don’t bother who they love because they know that no one can handle a woman who has thrown herself recklessly into a passion. Every man knows he cannot truly fulfil the desires of a woman in love but oh how I loved him. I could have done anything for him.”
She looked at the air with a vengeance.
“What if Ola wasn’t meant for you. Why couldn’t you just forgive him and let him go? You can’t let Ola be the standard for all men”
Her eyes became more withdrawn, she took a drag at her cigarette.
Her voice trembled as if with some urgent doomsday message.
“A woman doesn’t love. You hear me! She just doesn’t.”
Her voice became calmer.
“Think back on your life Child, would you say you really love your fiancé or he is the only one available. I mean he is convenient. You look like you are in your early thirties and life had taught you that the thing people call being in love is as temporary and short-lived as a momentary concussion. What you really desired wasn’t the romance or what people call love but someone who will be there after the happy ending and the end credits has rolled away.”

She took a gulp of her gin to moisten her mouth.

“It is really sad, isn’t it? That one cannot have it all. The world always cautions us to be reasonable and if we refuse what can a woman look forward to. Her career. Sex with different men. Children without fathers.”

She smiled and said; “Maybe those things aren’t so bad you know.”