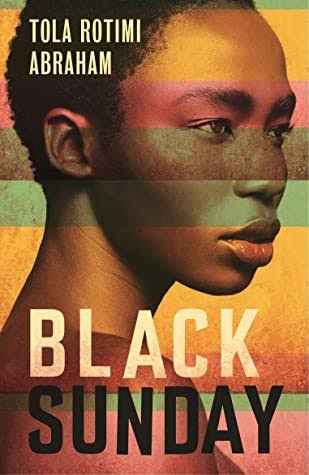 ‘THERE WERE MANY easy ways to be a stupid girl in Lagos. We were not stupid girls. We were bright with borrowed wisdom.’ Declares Bibike, cementing the Pidgin saying: if you no wise for Lagos you no fit wise for anywhere.

No matter how you try to get hold of its title, it is ‘Black Sunday’ every day in Tola Rotimi Abraham’s debut coming of age novel.

It is 1996, twin sisters Bibike, Ayirike, and their young brothers, Andrew and Peter, though not from a wealthy family are enjoying a comfortable life afforded by their mother’s connexion in the military regime, and a house gifted to her by her late parents after her wedding. It is easy to not see the survival of the family rests on her for as soon as she loses her job because of political strife, things go down south. Slowly, the happiness, the joy, all the things the family hold dear fall apart. After the Father loses their house to a Get-Rich-Quick scheme, the overwhelmed mother leaves first, the father follows suit after abandoning their four children with his mother, their grandmother.

Divided into four sections, alternating between point of views of Bibike, Ayirike, Andrew and Peter, Abraham delves through loss, runaway parents, poverty, cruelties of boarding school, with certain hilarity and sorrow breathing in every page.

While we come face to face to a very Nigerian boarding school, wrought with violence, toxic masculinity etcetera, it is the twins Bibike and Ayirike that reveals the wiring of Lagos: a city that takes more than it could give. A city where to be female is almost a difficult ‘task’. Men are at every corner trying to take advantage of your body, including Alhaji Sule who is supposed to be a father to his daughter’s friend.

‘I was a parentless teenage girl living with my grandmother in the slums of Lagos. Beauty was a gift, but what was I to do with it? It was fortunate to be beautiful and desired. It made people smile at me… But what is a girl’s beauty, but a man’s reward? What was my beauty but a proclamation of potential, an illusion of choice?’

There are moments you start getting comfortable about the vivid pictures of a broken family (and the hard to get over poverty), a time you start anticipating a resolution but Abraham is not someone to trust with your emotions, the words strike again, at your jaw, taking a tooth off, aiming for your guts. Whether it is the time the twin sisters go separate ways to find their way in the world; one married to the childhood pastor she admired, the other choosing to raise her kids as a single parent, Abraham seizes every moment to remind the reader that ‘this is Lagos, not El Dorado. There’s no happily-ever-after… here.’

The characters responding to stimuli is so believable you’d wonder if this was actually fiction, but then, isn’t it what fiction is all about, to surprise? Or as Ayirike says ‘We think to ourselves, how does the storyteller know this? We are asking the wrong question. The right question is, why is the storyteller telling me this story?’ It is as haunting as it is mesmerizingly beautiful. It should have come with a trigger warning, though.

THE SIGNIFICANCE OF COLORS, AURAS AND EXPERIENCES - By Ethel Tawe

Fri Jul 24 , 2020
Colours are an essential part of the composition in photography and there is a real lack of understanding when it comes to colour. Generally, people don’t realize how important it is and it seems to be the case even with some of the more experienced visual artists out there in […]